The Department of Family and Support Services has been granted authority to enter into a $250,000 contract with Adam Wiesniewski’s EX3 Labs to develop a mobile application for a year-old city website, My CHI My Future. 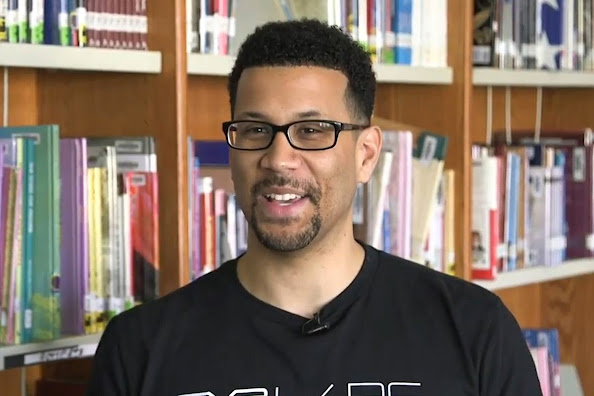 Adam Wisniewski is shown in a company video discussing the dedication in May 2019 of an immersive learning lab at Daniel Boone Elementary School, 6710 N. Washtenaw Ave. Screenshot

Adam Wisniewski is an African American entrepreneur who learned coding at an after-school program with skills reinforced at a Chicago Public Library.

Now, he will use those skills honed at the Chicago incubator hub known as 1871 to help other young people follow in his footsteps.

The City Council’s Committee on Education and Child Development on Wednesday gave the Department of Family and Support Services the authority to enter into a $250,000 contract with Wisniewski’s EX3 Labs to develop a mobile application for the year-old city website known as My CHI My Future.

The city plans to bankroll $140,000 of the cost to launch and maintain the app. The rest will be raised privately, officials said.

The website was launched in May 2020 during the pandemic-induced switch of Chicago Public Schools to remote learning, which isolated students who crave social connection.

The website’s goal was to connect every young person in Chicago with a “meaningful, out-of-school-time option,” according to Brandie Knazze, acting commissioner of Family and Support Services.

More than 20,000 young people have visited the website to learn more about the 200,000 in-person and virtual opportunities for jobs, recreation and social services.

“More than 70% of users access the website on a mobile device. More than 90% responded they would be more likely to engage with an app, over a website, to find the information they need,” Knazze said.

“The My CHI My Future mobile app will connect to an existing data source that will allow users to see and search program information, events and opportunities designed for youth by location and content area,” she added.

“The app will include information about jobs and social services, including health and wellness and food access. Youth do not have to have an account to use the app, but those who do have an account will also receive notice of programs, events and opportunities pushed to them based on their location or their interests.”

For Wisniewski, the app will be a labor of love and a chance to pay it forward for the opportunities he enjoyed.

“We’re extremely excited about the mobile app opportunity, in part because I actually learned how to code based on after-school programming and also through the generosity of the hardworking people at public libraries,” Wisniewski, CEO of EX3 Labs, said Wednesday.

South Side Ald. Jeanette Taylor (20th) asked what would be done to “keep young people safe.”

“We know that a lot of these apps that we create wind up having adults that shouldn’t be on the app,” Taylor said.

“If I get my young child to sign up for it, you need to reassure [parents] that he’s only interacting with other young people or the information that he is using is only for the city and not sold to other folks.”

Knazze told Taylor the new app would not “store any data,” but simply be “pushing information” from the city-controlled website. The city will “control and own” the code developed for the mobile app, she said.

“Additionally, in order to register for the application, it’s for youth 13-and-older. Any youth that is under 13 years old will need to have their parent approval,” Knazze said.

Wisniewski assured Taylor the app won’t have a “communication aspect,” so “there is no social media component and chance for interaction between children and adults … other than the information programs vetted … to make sure that all of the programs listed are safe and child-friendly,” he said.

The data would be “pushed out to end users so they can read and interact with it,” Wisniewski noted.

“Because they will log in, they will actually have a chance to have more of a personalized experience. They’ll get … recommendations based on programs, based on their interest levels, which is something that will be a first for this particular initiative,” he said.

Chairman Michael Scott Jr. (24th) noted there have been “various websites that focused on exactly the same thing over the course of the last three administrations.”

“Inevitably, there will be another administration. ... When that happens, is this easily re-branded?” Scott said.