Rene is having a terrific new show in Germany. 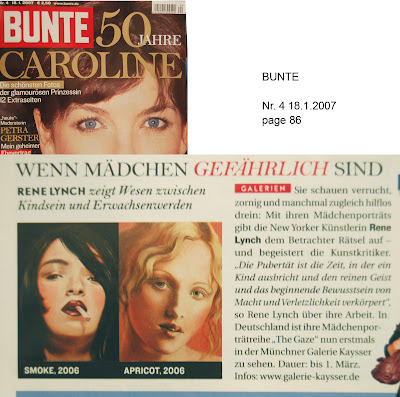 A New Addition (finally) to the Collection by 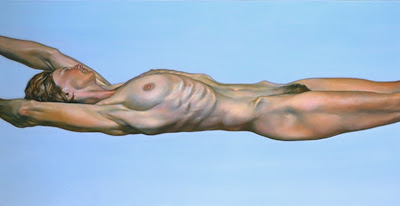 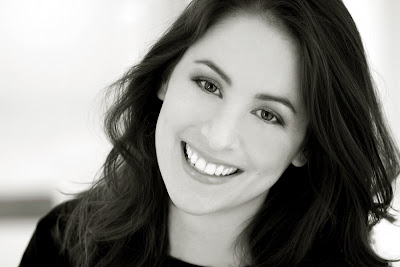 Email ThisBlogThis!Share to TwitterShare to FacebookShare to Pinterest
Labels: Family

Kay Ruane Piece on the Cover of FLAUNT 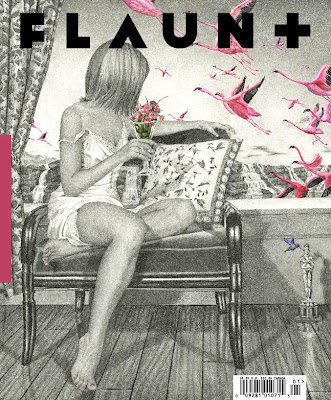 The New Catalogue from the Gdansk show is HUGE and really exceptional with substantial coverage of each of the featured artists including collection artists Steven Assael, F. Scott Hess and Jerome Witkin. The section on Scott Hess is reproduced below. 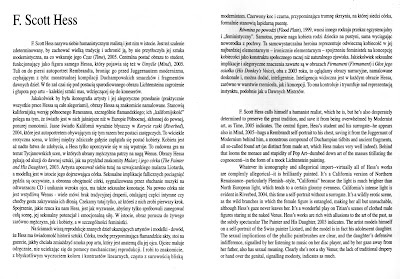 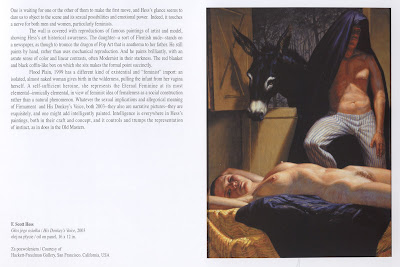 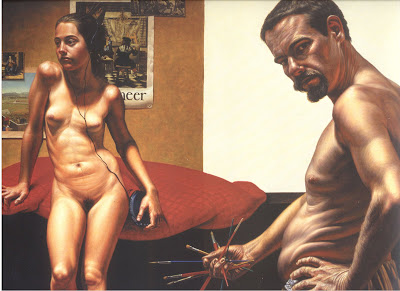 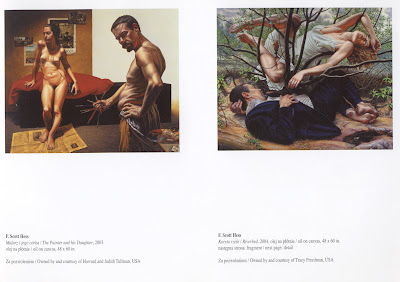 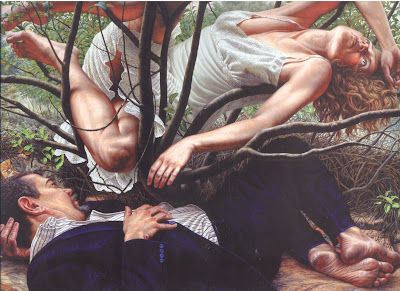 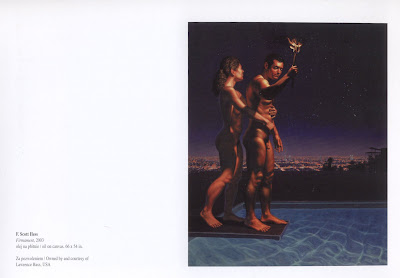 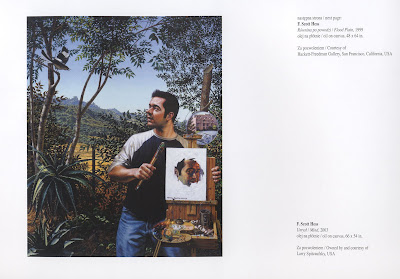 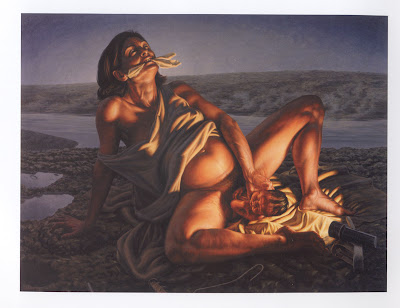 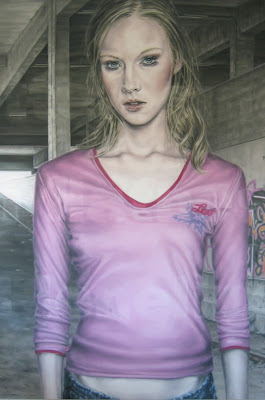 Klaus Wanker painting entitled: "Can you feel the disgusting, rotten smell of flatness and loneliness?" 2006
ARTIST STATEMENT:
On January 19, 2007, Galerie Adler, in its gallery space in Frankfurt am Main, will open the exhibition Illusion Unlimited with the Austrian artist Klaus Wanker (*1969, Graz).

In his early works, it is usually anonymous young people, whom Klaus Wanker represents in the poses familiar from the models of an advertising industry that operates worldwide. He portrays young people in wicked gear, whose appearance is oriented towards those media models who symbolise the dream of a beautiful and successful life in the glossy magazines. The desire to be a star is fulfilled in his pictures.

In these works, the artist focused on the persons and their faces, with the environment downgraded to second-rate status and usually at best imprecisely defined. The yearnings and dreams of his youthful ‘stars’ were detached from time and location.

In the more recent paintings, not any more anonymous people but professional models are shown, as the representatives of the young. Their personality is being formed by the advertising industry. In order to demonstrate this manipulation, advertising elements are, like in collages, composed and interpreted anew. The works are overlaid with barely legible scripts (representing the titles of the works). Wanker is using an approach similar to that of the subliminal advertising messages aimed at reaching the viewer’s subconscious without being obtrusive.

In his current work, the models are positioned in front of urban scenery. High-rise façades, underground rail stations and bleak urban landscapes are the scenarios in which they pose for the viewer. They look blasé, detached yet tinged with sadness. The beautiful world of appearances has left them behind all on their lonesome. Many of the new paintings are in monochrome colours, they recall the bleak ambience of the Film Noir, in which the city embodies the root of all evil.

In addition to the images of human beings, it is the requisites of the consumer and media worlds, the brand-name articles that are part of Wanker’s œuvre. Individual sneakers are blown up to the monstrous size of two by three metres and stylised into fetish ware, consumer icons out of all proportion. In contrast to the ethereal-looking images of his imaginary stars, his sneakers are bursting with colourful reality. Praying benches, real ones, installed in front of them exaggerate the products, support the message of the artist.

Review of David Hevel Show in KC at Byron Cohen


Dogs meld with celebrity, and dubious medicine is brought to light.
By ALEX SCHUBERT
Special to The Star 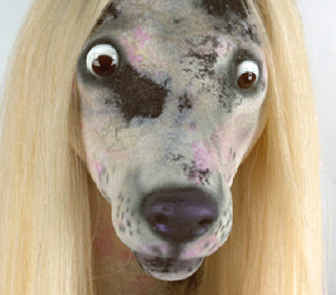 Hevel is soft-spoken, but even over the phone there’s no mistaking his enthusiasm for the idea.

Hevel, who left Missouri for California and a masters in fine arts in 2000, usually begins his sculptures with an exotic animal, a taxidermy form, which he then matches to a celebrity’s personality. He has made Tyra Banks into a giraffe, Britney Spears into a baboon and Mariah Carey into a goat. Hevel’s offbeat works at Byron C. Cohen Gallery include a decapitated Missy Elliott.

For his presentation at the Cohen Gallery this month, which debuts as part of January’s First Fridays event, he’s taking a simpler approach. It’s called “Diva Hound Smack Down at the Grammys.”

“The whole show is dogs, except for Paris Hilton. She’s a blind monkey,” Hevel said.

The inspiration is this year’s Grammy Awards ceremony, and Hevel uses the occasion to underscore the subtle motives of his ingénues. Beyoncé, Carrie Underwood and Paula Abdul devour a headless Missy Elliott in one particularly weird, gory piece.

His sculptures combine craft-store finds with a florist’s approach to composition, and he seems to be skewering both tabloid culture and home décor.

“David’s work is risky, because it’s so decadent, and so showy, and so over-the-top,” Byron Cohen’s assistant director, Toma Wolff, said. “I’m really curious to see how Kansas City reacts to it.”

If the enthusiastic response to the H&R Block Artspace’s “Cryptozoology” exhibition, which featured an assortment of imaginative animal sculptures, is any indication, Kansas City may be ready for Hevel’s doggie divas.

A while ago I wrote a short Preface to a new book by a friend named Barry Moltz about entrepreneurs called You Have to be A Little Crazy. Recently he sent me a link to a blog that had commented on the Preface and reprinted a section of it. I thought I'd share it again since it's not clear how many folks ever actually read the book although it continues to sell and race up the Amazon list. And it's worth reading.

You Need to Be a Little Crazy
December 27th, 2006 Sean Murphy

Theresa heard a radio interview with Barry Moltz in 2003 and suggested that I get his book. In December 2003 I purchased a copy of You Need to Be a Little Crazy and when it arrived from Amazon I put it on my to-be-read pile where it languished until early this morning when I read it in one setting, making notes in the margin and jotting down page numbers for quotes I was going to harvest for later re-use on a 3×5 card as I read.

This is a great book that I now wish that I had read the week that I got it. It’s only 208 pages but packed with some very powerful insights into entrepreneurship.

I want to quote a long passage from the Preface by Howard Tullman that offers a nice overview of the book and explains why Barry Moltz’s perspective on entrepreneurship is focused on the real issues: Identity, Family, and Failure. The passage was originally all in plaintext, I have added bolding to highlight what I consider key points.

When I first met Barry Moltz, I was struck by his unique perspective on the trials and tribulations of entrepreneurship. He took as a given all of the typical questions and concerns (about deal making, valuation issues, control issues, etc…) and turned instead to much more interesting and harder personal issues. Identity. Family. Failure. These aren’t soft subjects and it’s not easy talking about what no one wants to hear. But that doesn’t make them any less important.

Family is important because it’s a much more important extension of ourselves than any work we’ll ever do. There’s always more work but you’ve only got one family.

Failure is important because the first time you win (or lose), it could be luck, it could be timing, or it could be talent. It’s only after you fail once or twice and learn to rely equally on thought, analysis, and anticipation–in addition to speed, talent, and execution–that you can really call yourself an entrepreneur. […] In the long run, it’s mind over muscle, strategy over strength, and a healthy perspective–not just a lot of perspiration–that make someone a real success in his or her business and in the equally important rest of his or her life.

And one final (abridged) quote from Moltz himself in the Introduction makes a point I have made to a number of folks who are not entrepreneurs (sometimes even to their spouses or others they have invited to be “a passenger in the race car”).

Entrepreneurs start businesses because..they have no choice. Passion and energy drive them on good days and sustain them on bad days.

I even remind myself of this from time to time. Some mornings when I am in the shower and contemplating the day ahead, I will remind myself that ”This is the life that I have chosen” because it’s never easy and it’s never dull.