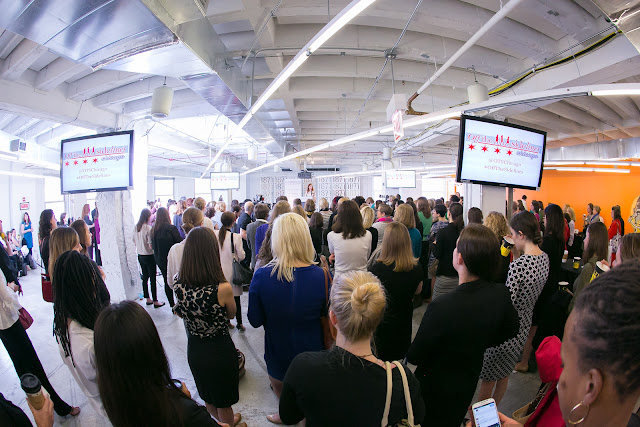 As luck would have it, I shared a dinner table Saturday night with the actor Mark Ruffalo, "Avengers: Age of Ultron" star, vocal feminist and climate change activist.

He was receiving an award from the Gene Siskel Film Center, and my husband, the Tribune's film critic, was leading the post-dinner, onstage discussion.

The dinner crowd was geeked. Many selfies were snapped with the extremely amiable (and photogenic) star.

The day before, I spent the morning with more than 300 women and a handful of men who gathered at 1871, the Merchandise Mart's entrepreneurial hub, to hear U.S. Sen. Kirsten Gillibrand announce the kickoff of her national Off the Sidelines campaign.

It's no exaggeration to say the electricity Friday morning — at 8 a.m., over coffee and scones — was as palpable and contagious as the vibe at the Ruffalo event.

The object of many a woman crush, Gillibrand is widely revered for her work on equal pay, campus sexual assault, military justice and LGBT rights. She's a star in her own right.

So when she teamed up with Cook County Commissioner Bridget Gainer to launch Off the Sidelines Chicago, women of all ages and backgrounds jumped at the chance to join the cause.

"This is about you," Gillibrand told the wall-to-wall crowd, which included Gainer's 11-year-old daughter and 13-year-old son, as well as U.S. Rep. Jan Schakowsky, YWCA Metropolitan Chicago CEO Dorri McWhorter and Kristie Paskvan, CFO of Mesirow Financial and founder of Chicago Says No More, which fights domestic violence.

Off the Sidelines aims to connect women and their allies with opportunities to agitate for change on the issues they're most passionate about.

"Every month you'll receive one email from Off the Sidelines Chicago," Gainer told the attendees. "It's pay equity, domestic violence, female entrepreneurs, supporting global women's issues. Each one will have five different ways to take action right now, whether it's a pre-drafted tweet supporting the local champions of issues in our city or the amazing work of local organizations that you can support. It's the bridge between one woman's passion and a coalition."

The first month's email mentions women and groups worth following on Twitter, women's organizations looking for new members, and upcoming networking and fundraising events for the Women's Business Development Center, Emily's List and the Chicago Alliance Against Sexual Exploitation, among others.

Gillibrand penned The New York Times best-seller "Off the Sidelines: Raise Your Voice, Change the World" (Ballantine Books) in 2014. Gainer met Gillibrand when Gillibrand was running for Senate in 2010, after being appointed by New York Gov. David Paterson in 2008 to fill the seat Hillary Rodham Clinton left vacant when she became secretary of state.

"We immediately built up a rapport," Gainer told me over coffee the week before the kickoff event. "When she wrote the book and I heard her talk about it, I really connected with the idea of taking your ideas and actually doing something about it.

"I feel like there's something broken," Gainer continued. "There are clearly women who want to be engaged and want to get involved, and there are clearly organizations that need people to be involved, and issues around which they need to put their action and energy, but that ability to connect the two — it's like it's broken."

That's where Off the Sidelines comes in, she hopes.

"So next year when we get back together — and we're going to need a much bigger room," Gainer told Friday's crowd, "we'll be able to tell the stories and point to the allies and show the impact of what we have been able to do together."

Gillibrand told a story about hearing Clinton speak when she was first lady and feeling called to action by her words.

"She looks out on the room, and she says, 'Decisions are being made every day in Washington, and if you are not part of those decisions and you don't like what they decide, you have no one to blame but yourself,'" Gillibrand recalled. "And I'm standing in the back of the room — the youngest woman by about 20 years — and I'm starting to sweat. And I'm like, 'Oh, my God. She's talking to me!'"

I'm certain many of the women in attendance Friday knew the feeling.

To start receiving Off the Sidelines emails and updates, sign up at OTSChicago.org.