Trump’s photo with his loyalists was a vulgar mess. And Ivanka brought a handbag.

Trump’s photo with his loyalists was a vulgar mess. And Ivanka brought a handbag. 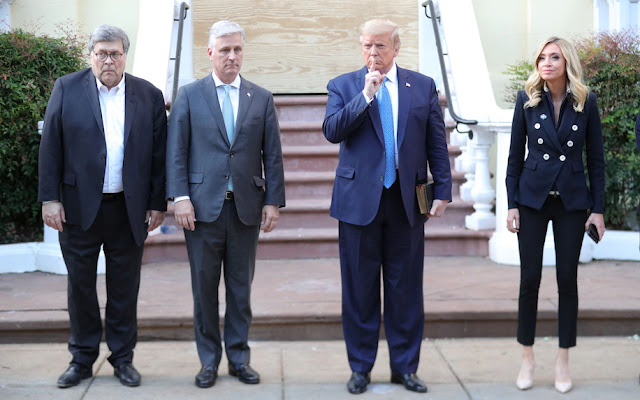 The president could have opened the Bible. He could have read Psalm 23. The Lord is my shepherd. Federal law enforcement had just fired tear gas at peaceful demonstrators, pelted them with rubber bullets and chased them away on horseback.

Trump now had the secured space to stand in front of cameras in front of a historic church. And he couldn’t even be bothered to crack the spine on the holy book.

Instead, he corralled members of his staff for a photograph that, in its nightmarish awkwardness, revealed all the ineptitude, cowardliness and pettiness for which the whole charade was a grotesque cover.

After a law-and-order speech in the White House Rose Garden, President Trump strode across Lafayette Square to the unassuming facade of St. John’s Episcopal Church. He didn’t go inside. Instead, the structure loomed behind him — a lemon-yellow, three-dimensional set for his tortured stage play.

The president was accompanied by a throng of staff, but the person who stood out in the blur of dark suits crossing the square was his daughter and adviser Ivanka. Always Ivanka.

She stood tall on her stilettos. She rose, golden-haired, above the group. She was dressed in black cropped pants and blazer. She was toting a very large white handbag and later was wearing a matching face mask with tiny metallic stars. 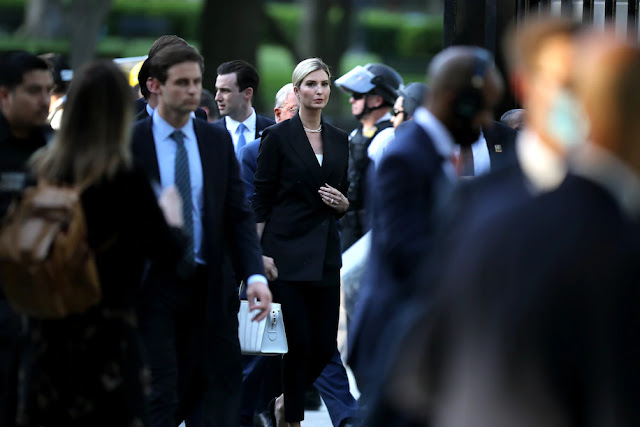 Ivanka long ago perfected the art of playing the part, of moving through life like an Instagram feed made real. Over the weekend, she’d tweeted a Bible verse. That was followed by an acknowledgment of Pride Month with a rainbow line of heart emoji. And now she was in the park just violently cleared of peaceful protesters. She was surrounded by police in riot gear. The chairman of the Joint Chiefs of Staff, Mark A. Milley, was in camouflage.

If other members of the administration were trudging across the plaza to a kind of doomed publicity stunt, Ivanka looked as though she were just gliding through — on her way home after a busy day in a comfortable corner office doing important things. As one of the few women in the group, she already stood apart. Her mask made her a laudable loner.

The handbag clasped in her right hand announced that she was not sticking around. She was there, but not committed — not to empathy, not to the militaristic display of strength, not to this gamesmanship, not to the horrors of this national stress test, not to anything but the Ivanka-ness of her public image, which is always about being power-adjacent.

Ivanka doggedly inserts herself into the center of photographs and conversations where she does not seem to belong, but this time she remained on the sidelines when the posing started.

Attorney General William P. Barr, national security adviser Robert O’Brien and White House spokeswoman Kayleigh McEnany were among those pulled center stage with Trump. Barr stared slack-jawed in an open-collar shirt, no tie. His jacket was open. O’Brien was buttoned up in a gray suit with a pale blue tie that was a shade lighter than the president’s, which trailed below his waistband as usual. McEnany was in a closefitting double-breasted blazer with gold metallic buttons and skinny trousers. She was perched atop a pair of stiletto pumps — a style of footwear that this White House, all on its own, may be keeping in circulation. 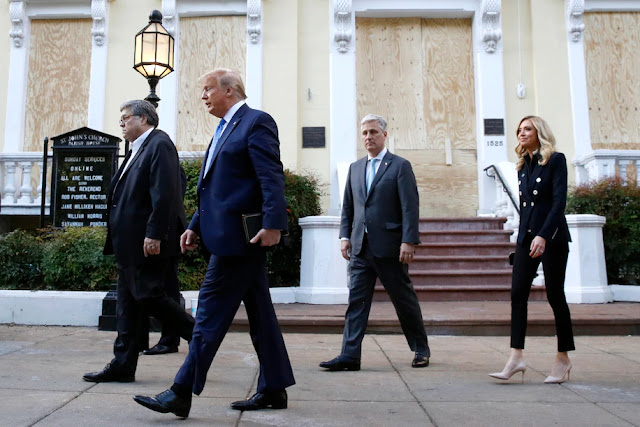 Having duly posed, the president left the scene. (Patrick Semansky/AP)

None of them was wearing a mask, because that would remind everyone that the world is still facing a pandemic, and besides, the masks would ruin the picture. Everyone stood apart, but not six feet apart. They didn’t lower their head in prayer or silent tribute to George Floyd — the man whose death after nearly nine minutes under the knee of a white Minneapolis police officer sparked this uprising. Their arms dangled at their side. No one seemed to know where to look or what to do or how long to stand there.

In some of the photographs, one can see Chief of Staff Mark Meadows, as well as Defense Secretary Mark T. Esper. They don’t elevate the images; they only make them more desperate — just two more faces looking blankly into the distance.

The photographs in front of St. John’s captured the president’s fundamental discomfort with what it means to exist out in the open where people do not soothe him with flattery, where brute force is an accelerant, not an answer, and where imperfect lives spill outside their borders. Trump worked so hard for his flaccid, sanitized photograph: a man standing with nothing but white bureaucrats — most of them men — on the plaza in front of a neatly boarded-up house of worship. Trump isn’t even really at the church; he’s in its vicinity. 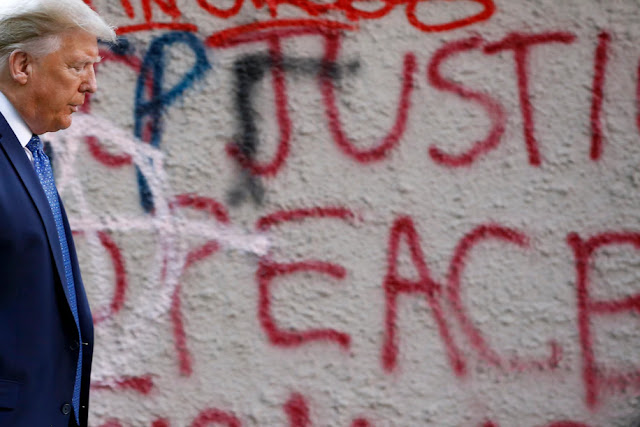 The anger and pain is everywhere, even if the president chooses not to look. (Patrick Semansky/AP)

The choreographed group picture captures none of the agonizing emotion of this moment. But it was out there, in the wild, and Trump had to pass by it. The pain was scrawled in jagged, vulgar graffiti on the walls abutting his path, on walls that couldn’t be scrubbed clean for his benefit.

The picture he orchestrated shows no hint of a commander in chief rising above or binding up anything. The photograph doesn’t convey power or competence. From every angle, in every iteration, it’s an image of a whitewashed group turning a deaf ear to a country convulsing over racial injustice.

Before Trump crossed the street, he announced with great fanfare to the American people that he was going to “pay my respects to a very, very special place,” one that was damaged in a fire Sunday. But it wasn’t a building that was calling out for care.