Glasser - Trump Hates Losers, So Why Is He Refighting the Civil War—on the Losing Side?

Trump Hates Losers, So Why Is He Refighting the Civil War—on the Losing Side?
A week of protest, pandemic, and political unrest in the capital. 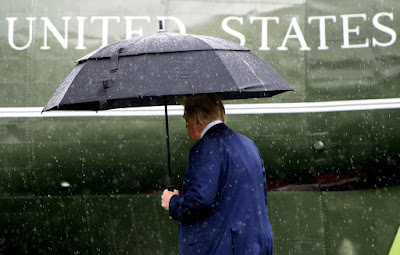 Trump, being Trump, has tried to tweet his way through interlocking crises. It has not worked.Photograph by Saul Loeb / Getty

It was a small moment in a week of craziness, but there is nothing like the rage of Donald Trump when a media outlet publishes a poll proclaiming him an almost-certain loser. There is, after all, no bigger insult in his vocabulary. The “fake news” are “sick losers,” Trump said the other day. Mitt Romney is a “loser.” The protesters calling for racial justice in the streets are “lowlifes and losers.” Not him. When CNN released a national survey showing Trump trailing Joe Biden in the general election, by a hard-to-surmount fourteen points, Trump ordered his campaign to respond. It did, on Wednesday, with almost comical bluster: a letter in which the campaign’s lawyers demanded that CNN not only retract the poll but also apologize for running it. This is petty-tyrant stuff.

In response, CNN’s general counsel, David Vigilante, mocked the President. “To my knowledge, this is the first time in its forty-year history that CNN had been threatened with legal action because an American politician or campaign did not like CNN’s polling results,” Vigilante wrote. (What a name for a lawyer guarding the First Amendment in these times.) “To the extent we have received legal threats from political leaders in the past, they have typically come from countries like Venezuela or other regimes where there is little or no respect for a free and independent media.”

Trump cannot change the numbers by sending in his lawyers, of course. The CNN poll merely found what the other national surveys have documented in recent weeks: a persistent decline in the President’s standing as crises proliferate and his leadership is called further into question. A Gallup Poll, released on Wednesday, found that Trump’s approval rating had plunged ten points in a single month. The veteran election analyst Charlie Cook told me that he could not remember a bigger fall. “It just put an exclamation point on what we were seeing elsewhere: he’s dropping,” Cook said.

The combined impact of Trump’s botched handling of the coronavirus pandemic, the concurrent economic crisis, and now his divisive, inflammatory response to national protests over police brutality and racial injustice have sent the President tumbling back to his “bedrock,” as Cook put it: a political base of somewhere between thirty-five and forty per cent of Americans who seem willing to back Trump no matter what. If the President stays on this course, he will lose.

The polls are hardly the week’s only unpleasant reality for the President. Several striking comments by his advisers in recent days portray a country, not just a political campaign, in big trouble. On Tuesday, Anthony Fauci, the government’s top infectious-disease specialist—for Trump and for all Presidents going back to Ronald Reagan—warned that the coronavirus pandemic, which has now claimed nearly a hundred and fifteen thousand Americans, is still rampaging. “It isn’t over yet,” Fauci said, and, indeed, in twenty-one states, from Arizona to Oregon, cases are still rising.

On Wednesday, the Trump-appointed chairman of the Federal Reserve, Jerome Powell, warned that high unemployment and economic fallout stemming from pandemic shutdowns would persist for years to come. “This is the biggest economic shock, in the U.S. and the world, really, in living memory,” Powell said.

On Thursday, the Trump-appointed chairman of the Joint Chiefs of Staff, General Mark Milley, warned of the dangerous politicization of the U.S. military and apologized for appearing in his combat fatigues alongside Trump last week, during a Bible-wielding photo op, minutes before which National Guard troops and U.S. Park Police violently cleared the square of peaceful protesters—beating some and firing flash grenades, chemical spray, and smoke. “I should not have been there,” Milley said. “My presence in that moment and in that environment created a perception of the military involved in domestic politics,” he added. “It was a mistake.”

As with the CNN poll he did not like, Trump’s response to his own government’s warnings was to deny or dismiss them—to create his own reality when confronted with the unpleasant fact that the country he leads is lurching from crisis to crisis.

Vigilante’s comparison to crisis-torn Venezuela, in other words, was painfully apt. When I read it, I immediately thought of an extraordinary encounter on the streets of Washington that I witnessed last week, during protests of George Floyd’s killing. Not content just to have Milley march alongside him to a photo op, Trump had demanded a heavily militarized response to the crowds protesting outside the White House and in cities nationwide. In addition to thirteen hundred members of the Washington, D.C., National Guard, five thousand National Guard troops were deployed to the city from eleven states, along with heavily armed federal law-enforcement officers, from prison guards and border-patrol agents to T.S.A. workers. The downtown area near the White House was cordoned off at checkpoints by armored Humvees and gun-wielding troops who refused to identify themselves or even, in many cases, their unit.

On the night of June 3rd, two days after Trump held his photo op there, I watched protesters confront two lines of troops in front of St. John’s Episcopal Church, across the square from the White House. Outraged at having been characterized as lawless rioters by the President, they tried to talk to individual soldiers and the whatever-they-ares in unmarked uniforms, who refused to speak to them or even look them in the eye. The deployment of such a military force to face a bunch of peaceful, sign-bearing, mask-wearing kids looked to me as though it was happening in Caracas, not the capital of the United States. Amid the uproar, one protester’s voice rose above the others. “You did it,” the protester shouted, as he pointed at the young National Guardsmen standing a few inches away from him. “It wasn’t the politicians. It wasn’t ‘socialism.’ No, it was your fucking fascist parade that you got over here. You guys look more like Venezuela than the U.S. right now.” And then he added, with a dramatic flourish not lost on anyone viewing the painfully un-American scene, “I should know: I was born there. I was born in Venezuela. You look like Venezuela!”
From ordering in the military to bludgeoning the media, Trump has certainly been doing a pretty good impersonation of a hack dictator. In the two weeks since Floyd’s killing ignited a profound national conversation about America’s terrible legacy of racism, the President’s contribution to this dialogue has been to consistently misrepresent what is happening as an outbreak of lawless anarchy that he is heroically cleaning up, as part of his newly rebranded “law & order” campaign.

Mostly, though, Trump, being Trump, has tried to tweet his way through the interlocking crises. It has not worked. On Tuesday, he began the day with a post suggesting that a septuagenarian protester who had been pushed to the ground by Buffalo police and suffered a serious head injury was somehow an Antifa conspiracist who did it to make the police look bad—an absurd conspiracy theory, which had just aired on Trump’s new favorite TV channel, the One America News Network.

On Capitol Hill, a by-now-familiar dance quickly began as Republican senators desperately sought to avoid comment on another incendiary Trump tweet. This time, they contorted themselves so foolishly that they would have been better off simply saying something, anything, instead of ridiculously pretending not to have anything to say about something so reprehensible and stupid. Burgess Everett, a Politico reporter, took to showing a printed-out copy of the tweet to senators when they claimed not to be familiar with it. So did Manu Raju, of CNN, who elicited a gem from Ron Johnson, of Wisconsin, when he tried to read him the tweet. “I would rather not hear it,” Johnson said, as he ducked into an elevator, which might as well be the official new motto of the Senate G.O.P. when it comes to Donald Trump.

They would rather not hear it because, of course, as a senior White House official told one reporter, the tweet speaks for itself. Res ipsa loquitur. It sure does. Trump, in all things, speaks for himself. It’s just that what he says is often so bizarre, alarming, false, and politically problematic that it is hard to process. It has been especially so in recent days, as the country has found itself in need of a leader but stuck with a loudmouth wannabe strongman.

On Wednesday, with Washington still in a furious buzz over the President’s attack on the brutalized senior citizen, Trump distracted from that distraction by deciding to tweet in favor of keeping certain U.S. military bases named for Confederate generals, in what appeared to be a spectacularly ill-timed intervention on behalf of traitorous slaveholders who lost the Civil War. Trump could not have seemed more out of step with the moment. A few hours after that tweet, with the country experiencing a rare outbreak of bipartisanship on the subject of racism, protesters toppled a statue of Jefferson Davis in Richmond, Virginia, while Nascar announced that it was banning all displays of the Confederate flag. On Capitol Hill, on Thursday morning, even the normally quiescent Senate Republicans on the Armed Services Committee suggested that Trump had gone too far and approved, by voice vote, a proposal by the liberal Senator Elizabeth Warren that would require the U.S. military to rename all bases which currently honor Confederate officers within three years. That vote, striking as it was, was quickly overshadowed by an even more consequential rebuke of the President: Milley’s extraordinary statement repudiating his participation in Trump’s militarized photo op. Trump, for once, was silent. At least, for a few hours.

I know it is hard to remember all the crazy things that happen in the course of a week in Trump’s America, but I will try hard to remember this one: a week when I saw troops in the streets and worried about a years-long economic crisis; a week when an untamed pandemic killed up to a thousand Americans a day; a week when massive nationwide protests suggested that our dysfunctional, gridlocked political system might finally actually do something about the plague of police brutality and systemic racism. And then there was the President, who chose to spend the week refighting the Civil War—on the losing side. This, too, I will remember, and so, dear reader, should you.