WILL: Trump must be removed. So must his congressional enablers.

THIS SAD EMBARRASSING WRECK OF A MAN 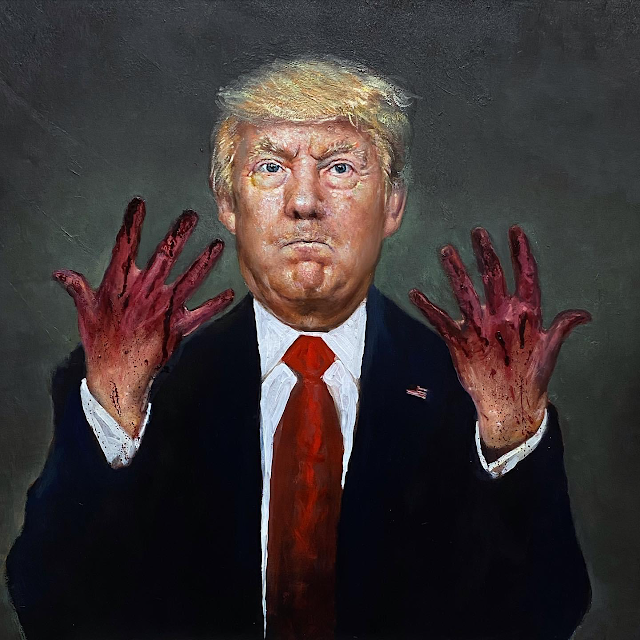 Trump must be removed. So must his congressional enablers.

By
George F. Will

This unraveling presidency began with the Crybaby-in-Chief banging his spoon on his highchair tray to protest a photograph — a photograph — showing that his inauguration crowd the day before had been smaller than the one four years previous. Since then, this weak person’s idea of a strong person, this chest-pounding advertisement of his own gnawing insecurities, this low-rent Lear raging on his Twitter-heath has proven that the phrase malignant buffoon is not an oxymoron.

Presidents, exploiting modern communications technologies and abetted today by journalists preening as the “resistance” — like members of the French Resistance 1940-1944, minus the bravery — can set the tone of American society, which is regrettably soft wax on which presidents leave their marks. The president’s provocations — his coarsening of public discourse that lowers the threshold for acting out by people as mentally crippled as he — do not excuse the violent few. They must be punished. He must be removed.

Social causation is difficult to demonstrate, particularly between one person’s words and other persons’ deeds. However: The person voters hired in 2016 to “take care that the laws be faithfully executed” stood on July 28, 2017, in front of uniformed police and urged them “please don’t be too nice” when handling suspected offenders. His hope was fulfilled for 8 minutes and 46 seconds on Minneapolis pavement.

What Daniel Patrick Moynihan termed “defining deviancy down” now defines American politics. In 2016, voters were presented an unprecedentedly unpalatable choice: Never had both major parties offered nominees with higher disapproval than approval numbers. Voters chose what they wagered would be the lesser blight. Now, however, they have watched him govern for 40 months and more than 40 percent — slightly less than the percentage that voted for him — approve of his sordid conduct.

Presidents seeking reelection bask in chants of “Four more years!” This year, however, most Americans — perhaps because they are, as the president predicted, weary from all the winning — might flinch: Four more years of this? The taste of ashes, metaphorical and now literal, dampens enthusiasm.

The nation’s downward spiral into acrimony and sporadic anarchy has had many causes much larger than the small man who is the great exacerbator of them. Most of the causes predate his presidency, and most will survive its January terminus. The measures necessary for restoration of national equilibrium are many and will be protracted far beyond his removal. One such measure must be the removal of those in Congress who, unlike the sycophantic mediocrities who cosset him in the White House, will not disappear “magically,” as Eric Trump said the coronavirus would. Voters must dispatch his congressional enablers, especially the senators who still gambol around his ankles with a canine hunger for petting.

In life’s unforgiving arithmetic, we are the sum of our choices. Congressional Republicans have made theirs for more than 1,200 days. We cannot know all the measures necessary to restore the nation’s domestic health and international standing, but we know the first step: Senate Republicans must be routed, as condign punishment for their Vichyite collaboration, leaving the Republican remnant to wonder: Was it sensible to sacrifice dignity, such as it ever was, and to shed principles, if convictions so easily jettisoned could be dignified as principles, for . . . what? Praying people should pray, and all others should hope: May I never crave anything as much as these people crave membership in the world’s most risible deliberative body.

A political party’s primary function is to bestow its imprimatur on candidates, thereby proclaiming: This is who we are. In 2016, the Republican Party gave its principal nomination to a vulgarian and then toiled to elect him. And to stock Congress with invertebrates whose unswerving abjectness has enabled his institutional vandalism, who have voiced no serious objections to his Niagara of lies, and whom T.S. Eliot anticipated:

We are the hollow men . . .
Our dried voices, when
We whisper together
Are quiet and meaningless
As wind in dry grass
or rats’ feet over broken glass . . .

Those who think our unhinged president’s recent mania about a murder two decades ago that never happened represents his moral nadir have missed the lesson of his life: There is no such thing as rock bottom. So, assume that the worst is yet to come. Which implicates national security: Abroad, anti-Americanism sleeps lightly when it sleeps at all, and it is wide-awake as decent people judge our nation’s health by the character of those to whom power is entrusted. Watching, too, are indecent people in Beijing and Moscow.