A TRIP BACK TO THE FUTURE (Tribeca Flashpoint Media Arts Academy)

A TRIP BACK TO THE FUTURE
(Tribeca Flashpoint Media Arts Academy)
We decided to revisit mega-collector Howard Tullman’s newly-renamed college, now called Tribeca Flashpoint Media Arts Academy, to catch up on what new artists and works of art he’s added to the constantly rotating displays at the Academy which he selects from his own personal collection. We also wanted to see what, if anything, has changed since Robert DeNiro and his partners became major investors in the school and when we could expect to see a branch of Tribeca Flashpoint in the Big Apple. 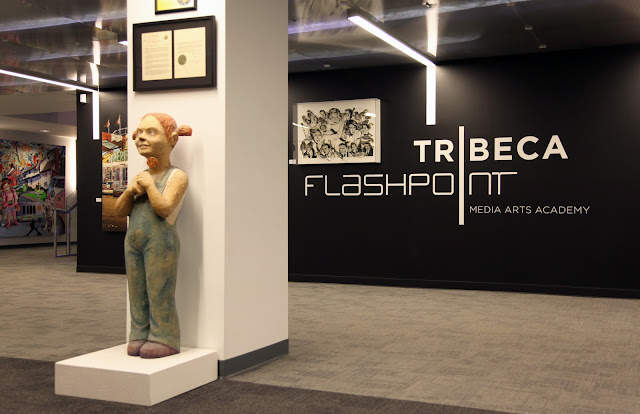 Tullman was his usual energetic self and he was quick to point out that many of the newer pieces on the walls were paintings by artists prominently featured in issues of the American Art Collector magazine which he continues to rely upon as a regular source for identifying new artists and selecting work for his extensive collection. 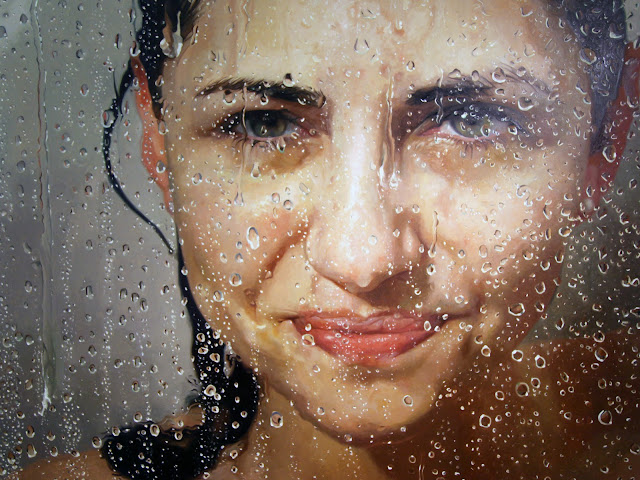 Tullman says that Alyssa Monks’ work continues to amaze and impress him and that he thinks she’s an important new voice in the New York arts community and tremendously dedicated and talented.
As we started our walk through the main campus building (about 100,000 square feet of newly-renovated and very “green” space), it was immediately apparent that there were an astonishing number of additional works and many of which would be familiar to our readers as well as to anyone active in the arts markets and national fairs over the last three years. We recognized artists from the Midwest and both coasts and Tullman pointed out that there were also a number of new works from international artists – particularly Germany and Mexico which were major acquisitions. 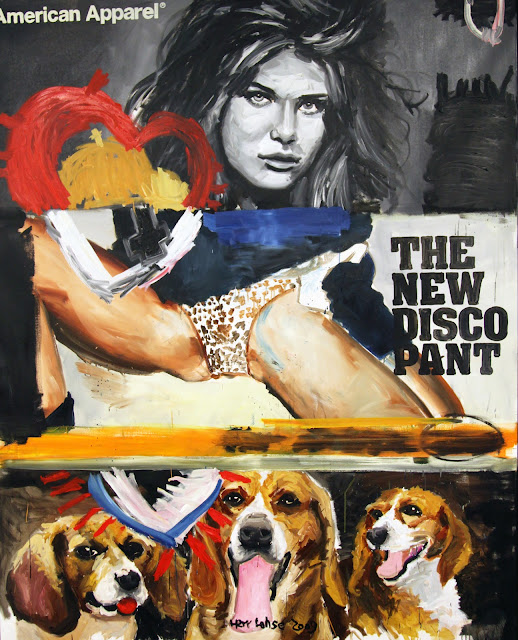 Tullman says that this very large painting by German artist Jorg Lohse works on multiple levels – first it’s just amazingly well painted and then the students connect with the pop culture references as well.
We were struck again by the fact that substantial works of art are literally everywhere your eyes wander and the fact that the views are simply amazing. A new initiative now includes printed and framed artists’ statements and comments about their work which are posted alongside a number of the pieces. As our tour continued through the various floors, we took extensive notes as well as a couple of rest breaks because there’s a real risk of simply being overpowered by the sheer size and scale of the presentations. In fact, we’re not sure - for pure stomach-wrenching visceral impact – that there’s a museum we’ve seen anywhere which can match the power and emotion of the Tribeca Flashpoint space. It just oozes energy and excitement.

So much art and so little time. While he wasn’t especially interested in giving us a firm number, we learned that there are now more than 1400 individual paintings and drawings in the overall collection with more than 200 large-scale works on display at Tribeca Flashpoint alone. Several recent articles have noted that The Tullman Collection is now among the five largest collections of contemporary realist work in the United States even after giving effect to more than a million dollars of recent donations to museums and foundations throughout the country. 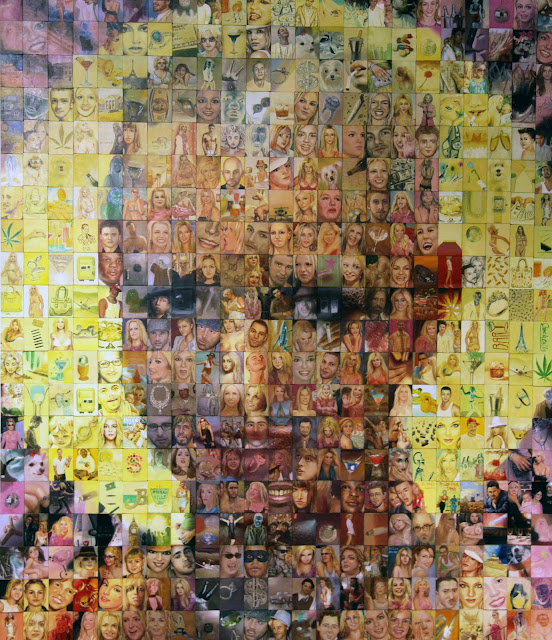 Cameron Gray’s “Oops! I Did It Again” with its prominent Britney Spears image is actually a collaboration organized over the Internet by the artist with hundreds of other artists. Tullman says it’s both iconic and also perfectly consistent with Tribeca Flashpoint’s emphasis on collaboration and team work. 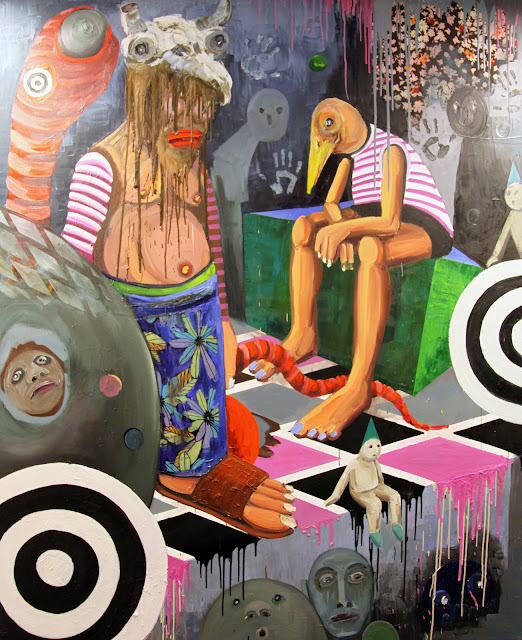 The Stefanie Gutheil piece called “Birdcage” is somewhat of a departure for the collection, but Tullman says that the artist has so much imagination and such a special world of her own creation that it just felt like it belonged here with the animation students.
But the simple numbers don’t begin to describe how the environment and the electric atmosphere of Tribeca Flashpoint surrounds you from the first instant you step into the space. It’s also immediately apparent that the students, staff and faculty share this energy and enthusiasm for great and beautifully-executed work in their everyday activities. The range and diversity of the collection is quite substantial, but almost every piece also seems to be a highly-focused reflection of Tullman’s very critical eye. 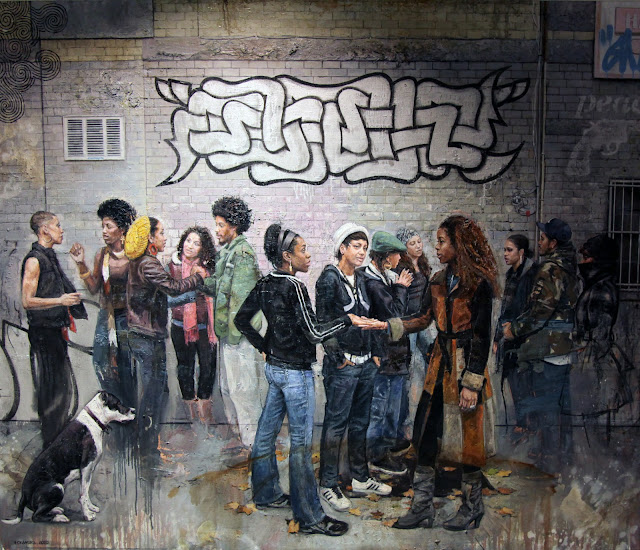 In examples like this Tim Okamura painting called “The Conversation”, the students are challenged to imagine and/or supply the narrative and try to explain the piece in their own words.
As we continued walking through the space, Tullman mentioned specifically that powerful narrative continues to be an important consideration in his selections of new work. But, most importantly, each piece still needed to be executed in a fashion consistent with Tribeca Flashpoint’s overall theme of excellence.

Tullman said that storytelling has always been and will always be a central concern of the visual arts (noting also that it’s become an increasingly important tool in education) and it’s really no different at Tribeca Flashpoint. He laughed and said: “I like to say that all the technology in the world won’t save a story that sucks.” But, he went on to say: “Even more crucial from an education standpoint – and especially for younger students – is how the requirement to “tell a story” engages students and gives them a sense of ownership and responsibility that simply talking “at” them will certainly no longer achieve – if it ever did.

At Tribeca Flashpoint, working in constantly-changing teams across all four of the main digital disciplines, the students essentially construct their own learning approaches (aided, guided and abetted by the faculty) since everyone believes that it’s absolutely clear, in any creative group, that you’ll have a variety of people who learn at different paces and in different ways. 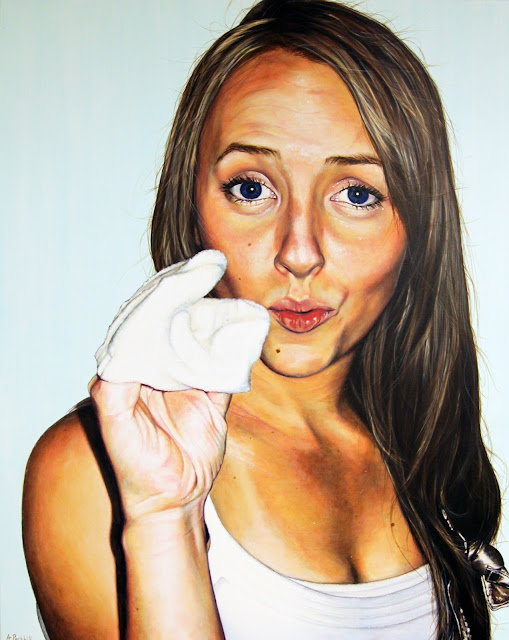 Tullman pointed out this striking Austin Parkhill painting and said that he expects that there will always be paintings that are confrontational and very much “in your face” just to keep things interesting.
The real bottom line and the primary outcomes they look for from the graduates at Tribeca Flashpoint are pretty simple. Tullman says that they’re trying to build creative problem-solvers with great people skills for the next digital generation. 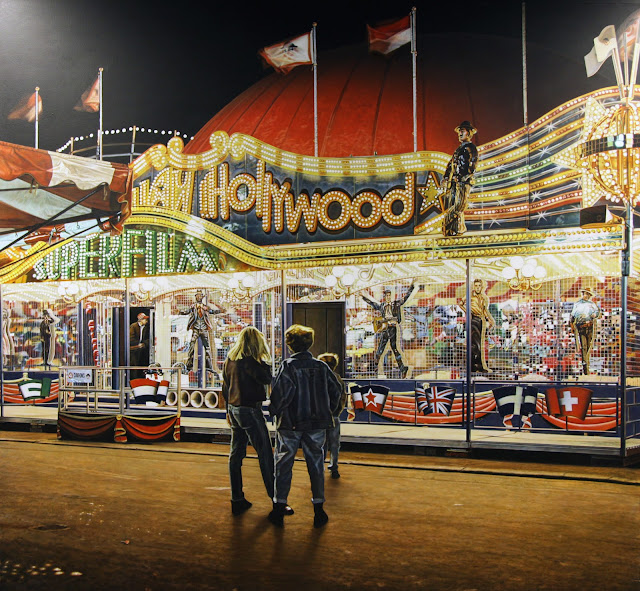 The main lobby at Tribeca Flashpoint features this large painting by Canadian artist William Lazos
He continued and noted that “In many ways, our students and graduates will face the same kind of challenges and issues that every artist confronts each time he or she sets up in front of a blank canvas. The fundamental questions never really change regardless of the medium of expression. They will always be:

What do I want to say?
How can I best say it?
What will it take to get the job done?
Do I have what it takes?