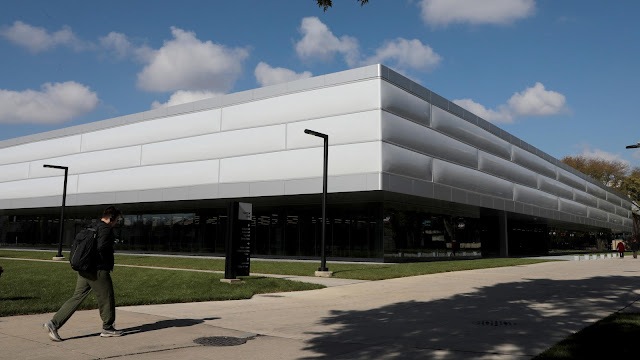 A look inside the Ed Kaplan Family Institute for Innovation and Tech Entrepreneurship at the Illinois Institute of Technology in Chicago.

Blair Kamin
A new building at the Illinois Institute of Technology looks and works like no other building in Chicago. It exemplifies an emerging trend in architecture — a “dynamic facade” that can tune a building to its climate.
The second floor of the two-story, steel-framed structure is enclosed in a technologically sophisticated skin of white, pillowlike cushions that can automatically adjust to let in more or less natural light depending on the weather.
Being inside the building's second floor is like being inside a cloud. On a gray day, you see ghostlike outlines of trees and adjoining structures. If you look at the pillowy walls too long, they create a disorienting moire effect. I wonder if it’s going to drive the inhabitants crazy. 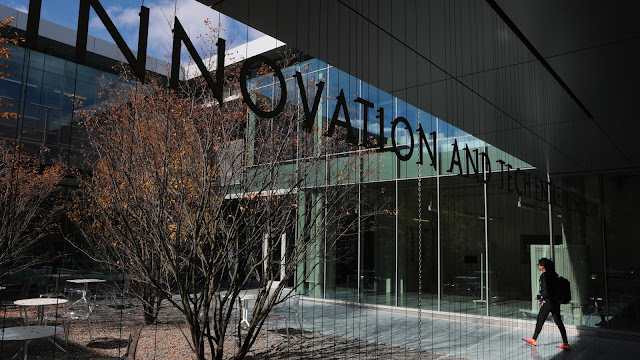 Maybe the building — the Ed Kaplan Family Institute for Innovation and Tech Entrepreneurship, also known as the IIT Innovation Center — is a glimpse of the future. Maybe not.
Regardless, it's fascinating experiment — the latest chapter in Chicago's long-running story of exploring and exploiting the latest architectural technologies.
Dedicated last Thursday and more than 300 feet long, the center is the first new academic building on the South Side campus in more than 40 years. It sits on the north side of IIT's property, not far from 31st and State streets.
The architect is Chicago's John Ronan, best known for his elegant, richly layered Poetry Foundation headquarters at 61 W. Superior St.
Designing a building at IIT, where the master modernist Ludwig Mies van der Rohe laid out an industrial-age expression of brick, steel and glass, is enough to give most architects sleepless nights. To much of the public, the campus is ugly, but architects revere it, especially its centerpiece, Crown Hall, a temple of steel and glass built in 1956.
In shaping the center, Ronan sought to update the lightweight appearance of Mies’ buildings with the aforementioned cushions. They're made of a translucent material called ETFE (short for ethylene tetrafluoroethylene).
ETFE, which has previously been used on such prominent structures as the "Water Cube" aquatics center at the 2008 Beijing Summer Olympics, costs only a fraction of what glass costs. And it looks ethereal, the very opposite of stone.
“I wanted the building to float,” said Ronan, who teaches at IIT’s College of Architecture. “I wanted it to look like a cloud, as if it would float away if it weren’t held down. I wanted to make Crown Hall look heavy." 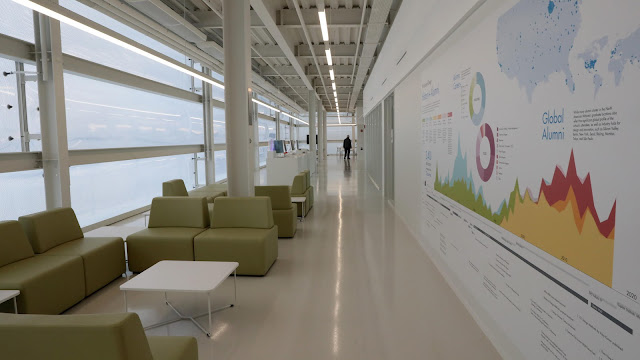 The first floor, wrapped in a conventional glass and metal facade, contains brightly lit, clean-lined flexible spaces where undergraduates can dream up and make new products. The second floor hosts the Institute of Design, a graduate design school founded in 1937 as the New Bauhaus. 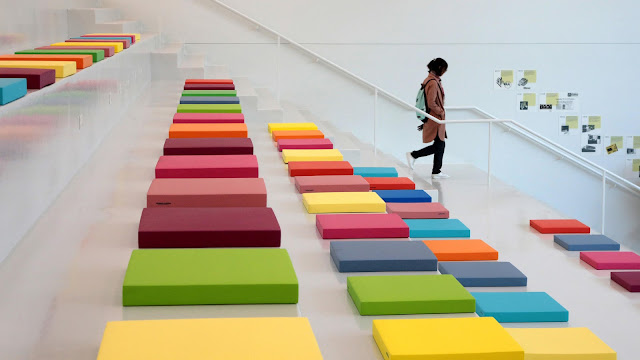 A wide bleacher stair, outfitted with colorful foam pads inspired by the Post-It notes that are a staple of communication at the institute, connects the two floors. It's one of several signals that the center, while respectful of the Mies legacy, is more joyful and less sternly Germanic than its IIT predecessors.
The center's pillowy skin is the most important sign of that shift in sensibility. 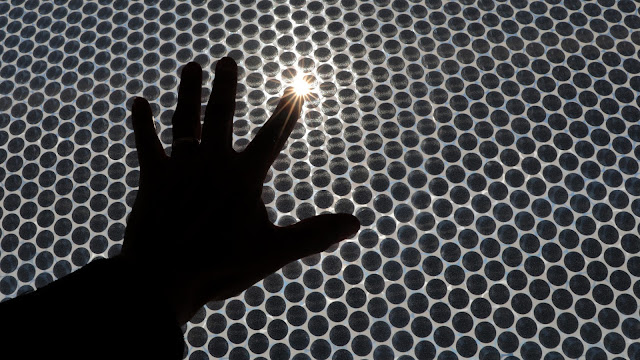 An advance over the nonadjustable sheathing for structures like the Water Cube, it consists of four layers that create three air chambers. A sophisticated pneumatic system can move the inner layer back and forth to adjust how much light and heat enter the building. The skin's techy sheen and the center's low-slung proportions are a perfect fit for the IIT campus.
So is the arrangement of the ETFE panels, which subtly alludes to the brick patterns of the Mies buildings. And the center's rounded corners gesture to Mies' famously articulated corners.
The design, in short, strikes the right balance between overly modest self-deprecation — a weak carbon copy of Mies — and indulgent self-expression.
How it wears over time, given the rigors of Chicago's climate and the tendency of students to treat buildings with something less than tender loving care, remains to be seen.
This much is clear: The center beautifully exhibits Ronan's capacity for layering spaces, a hallmark of the Poetry Foundation and the base of his otherwise bland new CNA high-rise in the Loop.
The Mies buildings stand like objects in a field of green. The center, in contrast, draws nature inward via two elegant, asymmetrically arranged courtyards. 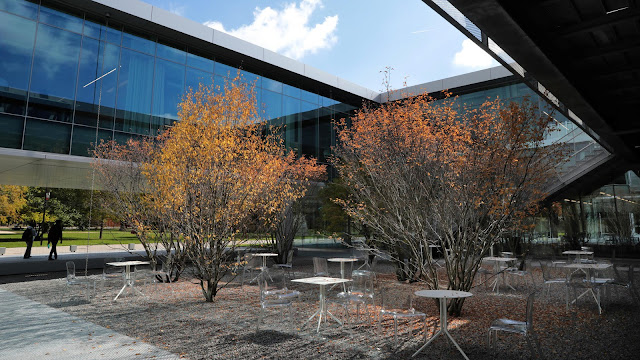 The courtyards, filled with trees and framed by glass walls, serve as entrances. They seem likely to be destinations, not just voids, where students and teachers interact. Ronan calls them "collision nodes."
When you're inside the building, the courtyards help orient you. They also provide unimpeded views of the outdoors from most of the interior, including the ETFE-sheathed spaces on the second floor. That's good.
Panoramic views aren't a necessity, but people still need to be able to look outside and connect with the sky and nature. Without the courtyards, the center would be oppressive — a case of design dictatorship, where the occupants have to adjust to the architecture instead of the architecture accommodating them.
The jury is still out on whether the center is as user-friendly as it's supposed to be. 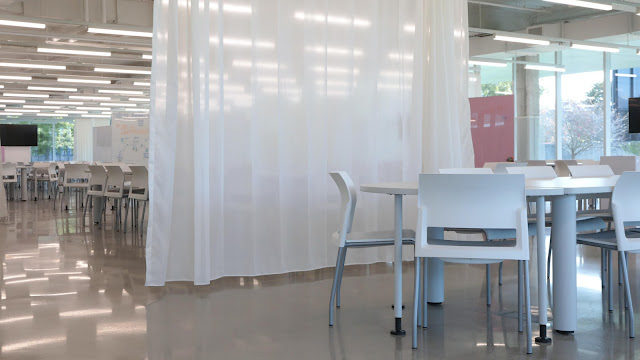 Here's what works: The spaces, airy and infused with shots of color, are pleasantly loftlike rather than harshly industrial. On the first floor, the spaces wend around the building's perimeter, from an "innovation alley" where ideas are hatched, to a "maker space" filled with saws and other machines, to an "idea shop" where parts are assembled. 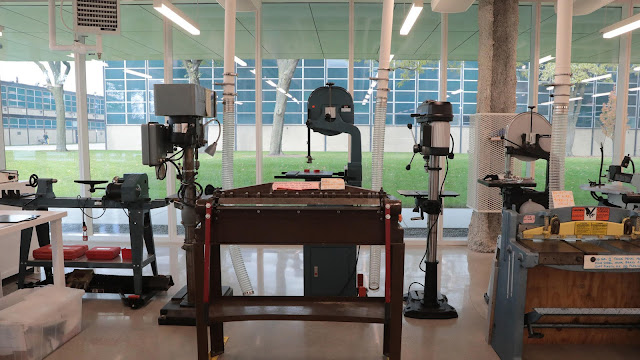 Because the spaces are visible to passers-by, the center advertises its activities, its process. Modern architecture is often accused of being too abstract to effectively communicate its purpose. But the decoration of traditional buildings isn't the only way to communicate. Transparency can speak just as powerfully. Here, Ronan uses it to cement the center's identity as an "idea factory."
The building also strives to be flexible in intelligent ways. The interior isn't just a big dumb space. It's full of different kinds of spaces. Some are open, others more intimate, many able to be subdivided by curtains and movable partitions. The design gives people choices. It's not blandly "universal," as so many modernist spaces are.
Still, my checklist of unanswered questions is long. There are the acoustics, always a challenge in open-plan interiors. And how will Institute of Design faculty members adjust to having cubicles instead of offices? Most of all, there's the performance of the ETFE — whether it will reduce energy costs, as expected — and its impact on the building's users. 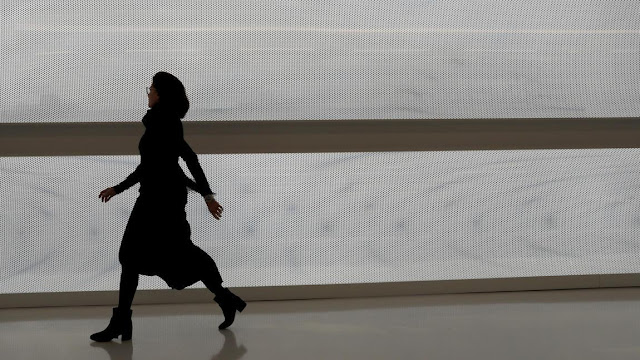 Denis Weil, the dean of the Institute of Design, told me he's gotten some blowback on the moire effect produced by the material. Once people learn not to stare at it, though, they adjust, he said.
Interestingly, the material also has been used for a greenhouse in Denmark. But people, unlike plants, have gotten used to those familiar things called windows.
Working in a cloud sounds cool, especially in the era of cloud computing. Yet it's going to take a while to determine whether IIT's latest design experiment is merely trendy or truly timeless.
Blair Kamin is a Tribune critic.
bkamin@chicagotribune.com
Twitter @BlairKamin