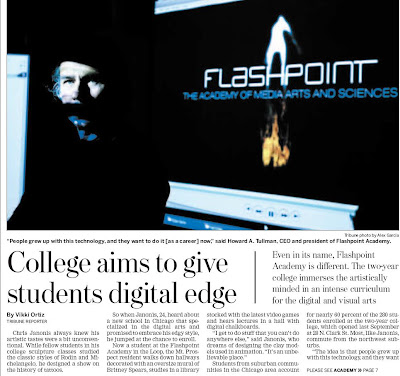 Chris Janonis always knew his artistic tastes were a bit unconventional. While fellow students in his college sculpture classes studied the classic styles of Rodin and Michelangelo, he designed a show on the history of tattoos.

So when Janonis, 24, heard about a new school in Chicago that specialized in the digital arts and promised to embrace his edgy style, he jumped at the chance to enroll. Now a student at the Flashpoint Academy in the Loop, the Mt. Prospect resident walks down hallways decorated with an oversize mural of Britney Spears, studies in a library stocked with the latest video games and hears lectures in a hall with digital chalkboards.

"I get to do stuff that you can't do anywhere else," said Janonis, who dreams of designing the clay models used in animation. "It's an unbelievable place."

Students from suburban communities in the Chicago area account for nearly 60 percent of the 280 students enrolled at the two-year college, which opened last September at 28 N. Clark St. Most, like Janonis, commute from the northwest suburbs.

"The idea is that people grew up with this technology, and they want to do it [as a career] now," said Howard A. Tullman, CEO and president of the college.

Administrators hope the school eventually will feed graduates into the top animation, video game design and digital arts companies in the country.

It's a goal some industry experts view with a shade of skepticism.

Two-year programs in digital arts can be great for students with raw talent who want to learn the technology quickly. But others could wind up less prepared than their counterparts at four-year colleges or in postgraduate programs, said Jesse Schell, who teaches entertainment technologies at Carnegie-Mellon University.

"It's hard, particularly in a short period of time, to really transform people" in this field, Schell said. Flashpoint officials contend their school offers a hands-on approach and access to technology unavailable at four-year colleges in Illinois and elsewhere.