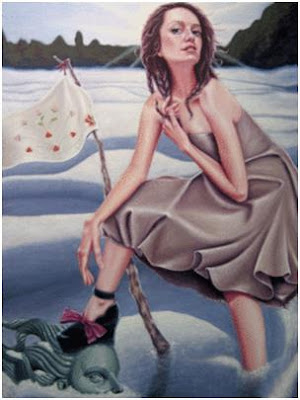 Ah, July: midway through the 2008 -- post Mileygate, post Hillary, post “Kristen,” (who prompted the “Spitzer? I hardly knew her!” ) Breathing a breath of fresh air into a topic desperately in need of some CPR, the intriguingly titled group show, Dangerous Women at DFN Gallery comes to our rescue. The exhibition is a raucous, brilliant display of what is and is not considered safe with society's ever changing definition of femininity. The artists involved also challenge preconceived notions of the pursuit of the feminist Holy Grail: that of the self-defined woman.

In her painting New Day, Alison Blickle seems to channel every girl's inner Patricia Field, having her erstwhile explorer triumph over the buried Grecian goddess beneath her, balancing her velvet embossed platform heels -- with bows to boot -- on a frozen body of water. But is this a female Sir Edmond Hillary, raising her flag in conquest, reaching the pinnacle of success or the white flag one of surrender? For the image Blickle is evoking is that of a sexed up fashion plate, eager to showcase her wares for her next victim. Is she a complacent player in the “What Not to Wear” generation of feminism, or is there more beneath the surface? I loved this piece for its challenge of initial perception. My own jury's out on if she's a harbinger of victimization or heroism. The come-hither expression, with bottom lip agape, looks more akin to Mischa Barton than to any championing of feminist thinking. It's an interesting juxtaposition -- the comely beauty, triumphant on solid frozen footing -- for the frozen river the subject stands upon seems as storied as the millennial glaciers. But last this reviewer checked, the glaciers are melting.

Next up, a wee lass who certainly could never do any wrong. Rafael Perez's Secretary is the standout of the show. Clad in a J. Crew v-neck sweater, proper bias-cut collared shirt, and button nose upon which rests a pair of librarian's glasses, she is the visual epitome of harmlessness. But look again: this is not merely a woman scorned, nor a woman wronged. No, she is diabolical. Like Bridget Jones on crack, this character has established a new level of water cooler vengeance. Perhaps she's just adding Sweet-n-Low to the boss' coffee, but my money's on GHB, cyanide or battery acid. Perez delivers a knockout punch focusing on every working woman's own frustration with the glass ceiling. I cannot say enough about it; it simply must be seen. 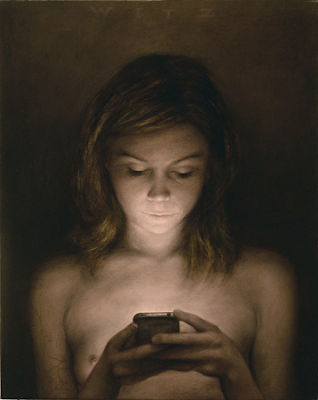 On the more upbeat side of things is Julie Lohnes' video, Fight. In it, a plethora of camouflage-wearing combatants beat each other senseless with feather pillows until the plummage spills wide across the battlefield, as if it were their own Gettysburg. I had to laugh at the friends wrestling each other to the ground, placing one other in headlocks not unlike a WWF or WCW match. A cease-fire ends with a barrage of feathers being stuffed down each other's collars -- an image straight out of a teenage boy's wet dream. But the participants here are determined warriors, and would trample any unsuspecting boy's heart into the ground. Upon second look, the players are clad in glitter star decaled shirts over their camouflage -- some in tight-fitting leggings -- all “girlified.”

John Jacobsmeyer's 2005 piece, Invisible Woman is another visual of a young boy's fantasy, and for any comic book loving women, another heroine for the ages. Her very name conjures up a tongue-in-cheek image, for her portrayal is that of the Second in Command of Marvel Comics' “Fantastic 4” -- right series behind “Mr. Fantastic.” Jacobsmeyer has painted an interesting backdrop for our superhero -- with numerals crossed out as if days served on a prison cell wall. How many days in captivity has our hero waited for the unleashing of her power? Her special power however isn't superhuman strength or x-ray vision, but invisibility -- the power to be overlooked.

Alyssa Monks' painting Press confronts the viewer with luminous breasts in macro close-up against a glass shower door. The woman seems to tease us with her perfect spheres, enticing us to come closer. Again, this work champions a new direction in female sexuality. Here is a woman who knows what she wants, when she wants it. But a certain four-letter word is too commonly used to describe a woman of this demeanor. Monks treats her subject with a great reverence however, and the piece really works. It's not just the creation of a master photorealist figure painter, but it embraces the fact a woman can embrace her sensuality and not be ashamed. I also liked the title of piece, because not only is it alluding to the process of the subject pressing her breasts up against the glass, but of the media's continued trouncing of women who take pride in their sexuality.

Other pieces of note: Dan Witz's Teresa, the beatification of a living woman by way of her iPhone; Sarah Bereza's intricate wood-framed Carina-- a vixen with legs spread, smoking a cigarette by candlelight; and Cathleen Faubert's I Want More Power Over My Fantasies, a tour-de-force video dive into the Id, culminating in a sea of pink cotton candy that cushions our heroine's fall. If only every woman was so lucky.