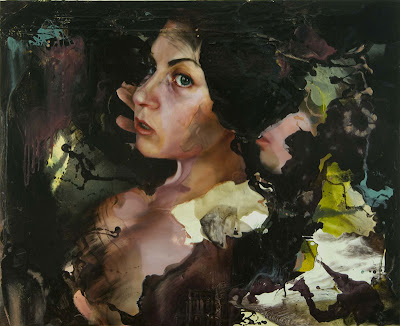 James Harris gallery is pleased to present if not, winter an exhibition that includes both monumental paintings and intimate works-on-paper by New York-based painter, Angela Fraleigh. Regardless of scale, Fraleigh’s work is unified by an unrelenting inquiry into social constructs of beauty and gender. Obscuring stereotypical imagery of couples caught in embrace with ambiguous power structures, the work is fueled by tension. Vulnerable figures embrace, but revulsion and desire, violence and lust appear in tandem. Distinguishing pleasure from struggle is complicated by the rich pours of paint that grip the figures and often envelopes the compositions.

The exhibition will consist of two grand paintings. In both works, two figures tumble across the canvas awash a sea of color. In one, the figures are camouflaged by pours of green, blue and white paint; in the other, abstract pours dominate less though they too subtly conceal the figure’s embrace.

This seductive imagery that lies at the root of the work's success is heightened by Fraleigh's provocative formal process. The artist begins each painting by exquisitely rendering the gestures of the figures. Through the medium, Fraleigh captures the nuance and intensity of passion. Explosive puddles of glossy paint are layered on and left to leak between the nudes, balancing the work between abstraction and figuration. The push and pull of the richly colored surface adds additional layers of tension between the figures, emotional embraces are ruptured by color.

In addition to the large-scale paintings, there will also be a number of smaller watercolors in the show. Loosely rendered with washes of color and pencil, Fraleigh's works-on-paper have an ethereal atmosphere. The compositions convey spontaneity and movement.

As Claire Barliant, Associate Editor of Artforum stated Fraleigh’s painting “plays on ambiguities…at once vulnerable and fierce, concealed and exposed.” if not, winter highlights these observations, also revealing how masterfully Fraleigh captures the seductive beauty and powerful fluidity of paint.