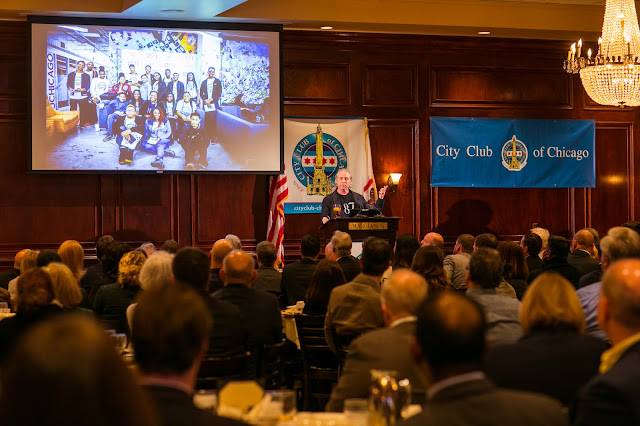 Kim Janssen Chicago Tribune
Outgoing 1871 CEO Howard Tullman took a victory lap with a speech at the City Club of Chicago on Tuesday — but if Chicago’s techies were expecting their fast-talking champion to fire a parting shot at the FCC’s decision to rescind net neutrality rules, they were mistaken.
Tullman, who announced his decision in August to step down after four years at the helm of the startup tech hub, was asked by an audience member how 1871 could mitigate against any harm caused by the decision to scrap Obama-era regulations that treat broadband internet service like a utility and prevent broadband providers from discriminating between websites.
But he seemed to surprise his interrogator by sitting on the fence on the partisan issue.
“I was just at a meeting in New York with about 300 technologists and CEOs, and about half the room was on either side of this conversation, so we don’t know,” Tullman said.
“I don’t think it’s really a black-and-white situation. … Honestly, net neutrality is fairly new — we got along without those kinds of regulations for the first 20 years of the internet, so I think it’s an open question. We’ll just have to see how things develop.”
Asked what he plans for his next act, the 72-year-old entrepreneur was coy, joking that he has been telling pals he will be “getting into inflatable pool furniture” to shut them up.
Despite his efforts to winnow his enormous art collection (200 pieces were recently auctioned off, and he plans to sell more), he admitted to Chicago Inc. that he hasn’t been able to stop buying paintings.
And his wife, big-time PAWS supporter Judy Tullman, said she hasn’t given up on her plan to get Mayor Rahm Emanuel to adopt a dog.


While the Emanuels “are not animal people, I never give up,” Judy Tullman said, adding that she plans to keep working on Chicago’s first lady, Amy Rule.