Sex and sunshine—and the plenitude of both the West Coast has always offered to cold-assaulted, repressed, tradition-bound Easterners—are at the heart of Sharon Shapiro’s solo show “California” at {Poem88} through April 2. 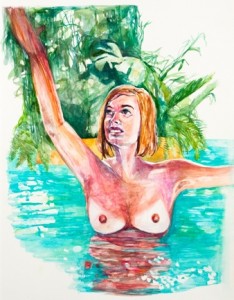 Drenched in nostalgia both heartfelt and mildly campy, Shapiro’s strength in “California” is a woozy, bewitching evocation of a largely imagined, fantasized-about time and place in dewy, Maybelline shades of pink and brown.

Drawing from the same Sixties and Seventies-era image bank that has of late given us muscle cars and Steve McQueen style, Shapiro’s vintage soft-core watercolors get at pornography’s strange mix of innocence, knowing and sexuality, which promises one thing—everything—and delivers another: nothing.

Her images are of girls-next-door and vixens both occupying the same body. Shapiro zeroes in on pornography’s fantasy-stoking, narrative-inducing seductive textures: feathers, heavy jewelry falling between breasts and the imprint of sunshine in bathing-suit covered blindingly white skin surrounded by a landscape of tan. 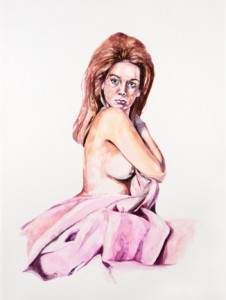 These smallish watercolors are both silly–flocked with neon colors, gumdrop-tinted hair—and melancholy, summoning up a long-gone vision of paradise and the women who embodied it. In the watercolor “Madonna Inn” an Ann-Margret all-American vamp strikes a vintage men’s mag pose of come-hither and haughty–both denying our gaze with her clutched pink frock, and indulging it with her blatant nudity. The pin-up becomes a metaphor for our communal, cultural fantasy of California-as-deliverance: beckoning, denying.

The artist has interspersed her watercolors with photographs made using the iPhone Hipstamatic application—a weird, very 21st century hybrid of cutting-edge technology and nostalgia-soaked old school aesthetics that foregrounds Shapiro’s simulacrum of the past. In the Hipstamatic, which mimics the hazy, squared-off look of a vintage Polaroid or Brownie snapshot, Shapiro’s images of palm trees, beaches and retro sports cars are saturated in the same sense of longing and nostalgia as her pin-ups.

Shapiro is on shakier ground with her large-scale acrylic paintings, which look gaudy and bloated next to her far moodier, more formally interesting watercolors. Works like the acrylic on canvas “Ease,” featuring an amputated, headless torso with two very visible breasts, fall resoundingly flat. The image cuts off the woman’s humanity and the wistfulness and crazy, sun-baked allure the pin-ups offer.

Shapiro’s watercolors find their strength and resonance in their diminutive size which contains and entraps their vixens in the format of magazine pages. The more forgiving, dreamy, amorphous contours of the watercolors suit Shapiro’s mission far better.

“California” is about longing: for the past, for paradise, for sunny beaches and swaying palms, for sex. When it sticks to the hazy imagery of desire, it succeeds beautifully.