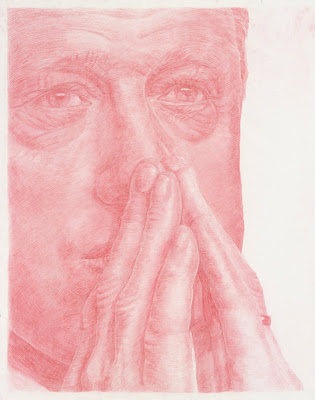 This series seeks to transform photographic images of Bill Clinton taken from popular culture into art by restoring humanity to photographs shown in the press.

“Praying Hands” extracts the universal from the specific by reinventing and reinterpreting Clinton’s image. Thousands of pencil marks reveal the artifice and hand behind the image making while enacting an alternate rendering through framing, style and genre.

The title of the series is borrowed from Durer’s 1508 drawing “Praying Hands” The image echoes the renaissance drawing’s style and emotional tenor. While images from the popular press tend to inspire snap judgments and quick glances, images from “fine art” tend to have a more timeless quality that inspire a longer gaze and viewer empathy.

In “Praying Hands”, Clinton’s face and hands become a mirror for mutual recognition with the “other”. Clinton becomes a man caught in the midst of a struggle between his inside and outside selves. His hands covering his mouth, silencing himself at this climactic moment in his life when he stands to lose everything he has worked for. By cropping obvious elements such as his nose, full head of hair, and mouth, the viewer responds with initial uncertainty, sensing a familiarity with the face, but unable to immediately fall back on a pre-determined response, he/she must look at the face afresh, with openness and intimacy.